When I arrived at the gate, it was First Class boarding only so I got on to the plane (a 757-200) right away despite a full First Class cabin.  On a Regional Jet or even a 737-800 boarding is from the very front of the plane, which means that all passengers walk through the First Class cabin of the aircraft, whether or not they are seated there.

On flights with a 757-200 however, boarding is from just behind First Class, which keeps the two cabins separate during boarding.  While I enjoy the added privacy upon boarding, I love people watching as they enter an aircraft and this is something I miss when flying on a 757.  Besides all the other perks of sitting at the front of the plane, I love being able to sit and watch people as they walk by me–it’s like a parade of travelers and luggage.  I’m not sure how true it is, but I think you can tell a lot about a person and how their life is going simply by observing them as they walk towards their seats and are nearly forced to be patient while fellow passengers get settled in. 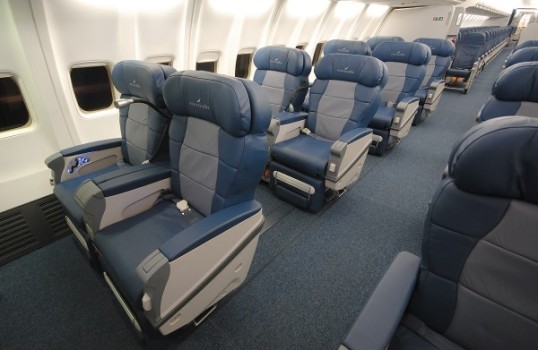 Maybe it was that I smack dab in the middle of a 24-person First Class cabin and wasn’t actively watching people board, that the plane holds 300 passengers, or just me, but it seemed like 5 minutes before the purser offered me a pre-departure beverage.  While this may seem unbearable to some, I didn’t really mind since boarding continued for another 15 minutes afterward.  I went with a coffee with Baileys, which inspired a gentleman in the row behind me to do the same.  I love being a trendsetter!

I ended up having a refill (call me a Kettle Medallion) and by then we were ready for takeoff.  A little bit after we had leveled off in the air, the purser and two other flight attendants set to work taking drink orders again, then brought around hot towels. (I have never figured out it it acceptable to also wipe my face with it or not, but I do it anyway)

Soon after I was offered my choice of cereal, cereal, or…..nothing.  I was hoping for an omelet since I know that some Delta flights serve them, but I shouldn’t be picky since I would be eating a meal at 30,000 feet for crying out loud!

The cereal and milk came along with a bowl of fruit, yogurt, and a rather delicious croissant. 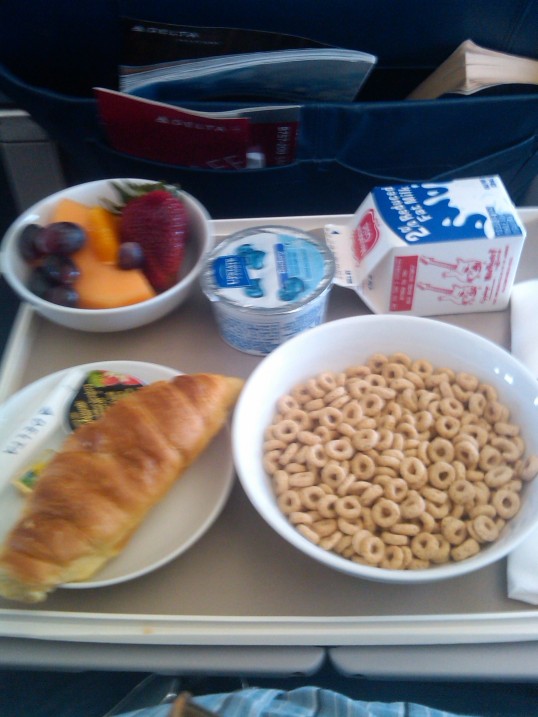 Following breakfast, I watched a little bit of The Traveler with Johnny Depp on the AVOD (Audio/Video On Demand) which is fitting for a vacation trip, but with a rather strange ending.  I hadn’t slept much the night before, so I ended up playing some light music and resting.

The only other noteworthy part of the trip is a comment another passenger made to me.  After I had gotten up to use the lavatory a few times (too much coffee) he told me that he was trying to rest and asked that I not hold on to the back of his seat when getting up.  I have probably done this dozens of times to steady myself as I get up from my seat without realizing.  I apologized profusely both then and at the end of the flight, as I realized it was an invasion of personal space.  Ever since this experience, I have worked hard at catching myself if I am about to grab the back of someone’s seat while standing up on an airplane or bus.

Are there any sub-conscious behaviors you have to prevent yourself from doing while flying?