Once I retrieved my baggage at Reagan National, I purchased 3-day Metro pass.  I then hopped on and headed to the Ritz-Carlton, Pentagon City, which like the airport.  In addition to only being a couple of stops away from the airport, the hotel provides convenient mass-transit access in that it is literally across the street from the Pentagon City Metro station.

At the time, I was not blogging, so I did not get an outside picture of the hotel.  However, the photo below is courtesy of the Ritz-Carlton website:

As I mentioned in the trip introduction post, the room had been booked using 120,000 Marriott Rewards points for four nights.  As I found out later, Ritz-Carlton award stays of 4 nights or longer receive the final night complimentary.  Oh well–it really didn’t matter though since I couldn’t stay more than 4 nights because of work.

I was greeted at the door before proceeding to the check-in counter inside.  There was one other person checking in while I was there, but I had to wait for 5 minutes which kind of irked me.  I inquired about an room upgrade and/or access to the Club Lounge floor, was told that this was not a common benefit given to Marriott Rewards Platinum members.  As I will later explain, this did not turn out to be that big of a deal.

I was directed to the 14th floor, where I was provided a Deluxe Guest Room.

Entry Way to my Hotel Room

Don’t worry – the bed and bathroom didn’t look this un-kept when I walked in.  I took these pictures just before leaving the hotel on the final day of my trip. 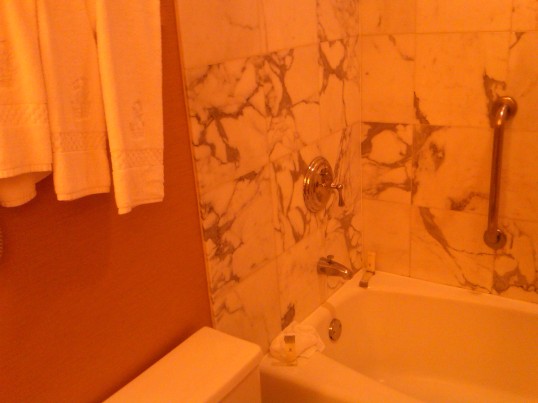 The “denied” Club Lounge access didn’t turn out to be a problem, though on a couple of counts.  The lounge is situated on the 18th floor, and my key card denied me access to this floor, since my room was on the 14th floor.  I remedied this problem though, by taking the emergency exit stairs up to the 18th floor.  I have actually tried this at a couple of hotels, and in some cases there is a key-card entry to the lounge.  I lucked out in this instance, since there was only an entryway leading into the lounge.

Before anyone screams at me for being unethical, I may have had key card access all along.  The last day of my trip, on a whim I decided to try to use my key card for access to the club floor, and it worked!  There is a chance the lady at the front desk might have been confused.  After all, her English was not what I would call perfect.

Again, I unfortunately do not have photos of the club lounge so you will have to make do with another photo from the Ritz-Carlton website.  The lounge provides an exception view of the surrounding area including the Pentagon, Reagan National Airport, and the Washington Monument.

The hotel spread was delicious, but not necessarily substantial.  The breakfast was more of a continental breakfastl style, and finger foods/hors d’oeuvre were available for lunch and dinner along with complimetary wine and beer.  Unlike a number of other hotel club lounges however,  this one was actually open during the weekend.  In fact, despite the erratic times when I would frequent the lounge due to trying to see the city, I sort of became known as a regular by the lounge staff.  During one of the days I was in there, I was asked at lunch if I would be joining them for dinner.  While I told them I wasn’t sure if I would be making it, I appreciated their consideration, and think this exemplifies the great service of the fine hotel staff.

I also did visit the fyve Lounge on the ground floor of the hotel for a drink.  Nothing memorable, except for a citing of the founder of some obscure site called Facebook, complete with his entourage.  I should have told him Timeline would be a bad, bad idea but that is another topic entirely… 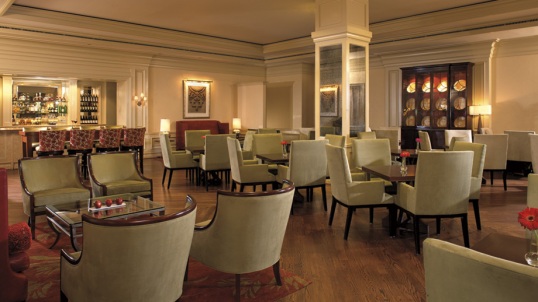 Overall, I would rate the Ritz-Carlton, Pentagon City a 4 out of 5.  While I came across some friendly staff, the check-in staff seemed inefficient and a little snooty.  I found having a Metro stop right outside of the front door very convenient for my visit to Washington, D.C.  For my next visit to the area I would really consider staying at this property again.