Following a shower and breakfast in the lounge the next morning, I headed out on the Metro.  My original plan was to head down to Alexandria via the King Street station, but that got temporarily diverted. To my misfortune, the yellow line (the one I was trying to take) of the Metro was undergoing weekend maintenance outages.  Just my luck that only one track was being used for travel in BOTH directions.  My patience with the Yellow line of the Metro reached a low, so I quickly changed plans and headed for the Federal Triangle area.

During my Segway tour the previous day, our tour guide recommend the Old Post Office pavilion as place to shop and find great views of the city.  While it did once serve as a Post Office sorting center, it soon grew outdated and the atrium has been turned into a shopping/food court area.

I headed in then took the elevator up towards the top.  About half way the elevator stops and there is a gallery area on the history of the building.  Ironically, when the Post Office Pavilion in the 1890s, it was built in the “older” Victorian style of architecture, and even then referred to as the “Old Post Office Pavillion.”

I continued up to the bell tower, in a glass elevator, which provided a great view of the atrium below:

At the top level of the bell tower are windows on all sides for taking in the breathtaking view.  And I do mean breathtaking.  I actually forgot how good the views were (take that, One Mile A Time) until I started putting this trip report together.

I would even argue that it is provides a greater vantage point than the Washington Monument.  Sure it is not quite as tall, (only 9 stories vs. 555 feet) but it actually is situated on Pennsylvania Avenue.  Thus, in one direction you can look right down the street to the Capitol building, and in the other right down to the Treasury Building and White House.  Even better, it is relatively unknown to many tourists, so there is virtually no wait to get to the top.

View of the Capitol Building

View of the US Treasury Building and White House 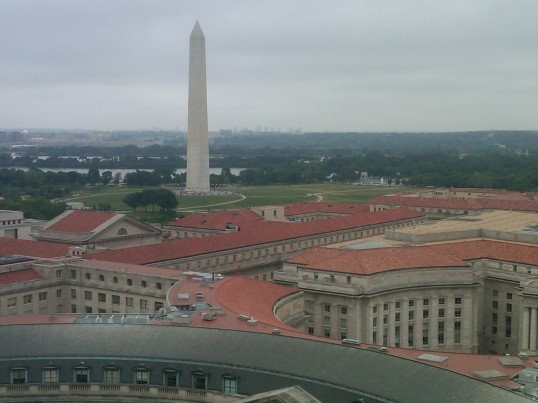 View of the Washington Monument

I headed back down then walked down Pennsylvania Avenue to the famed Occidental Grill.  The walls are covered with pictures of famous celebrities and political figures dating back to the early 20th century.

As an appetizer, I had the Grilled Quail Stuffed with Duck Sausage, which consisted of “Sautéed Swiss Chard, Caramelized, Sweet Onions and Herb Jus.”  It was simply delicious. 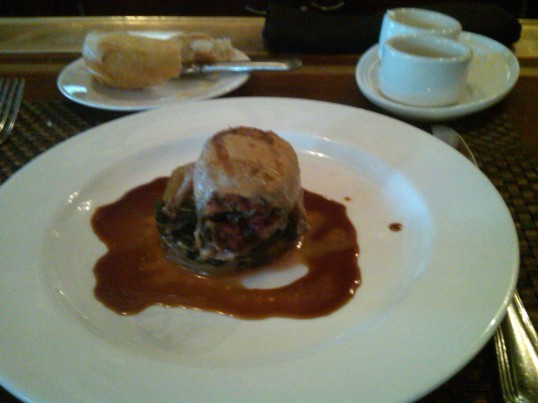 Then as my main entrée I went with the Grilled Atlantic Salmon.  It consisted of “Seasonal Baby Greens, Beets, Pistachio Nuts, and Golden Raisins and Banyuls Vinaigrette with Caramelized Shallots.”

Being a history buff, I decided to walk over to the historic Willard Intercontinental Hotel, which sits adjacent to the restaurant.  In November 1861, while staying as a guest at the hotel, Julia Ward Howe penned the words to Battle Hymn of the Republic.  In commemoration, there is a portrait of Julia in the lobby:

One hundred years later, Martin Luther King, Jr. finished putting together his “I Have a Dream Speech” while staying at the Willard.  Enough of the history lessons before I lose some of my readership….

I decided to try my go at the dysfunctional Yellow line of the Metro, and aided by taxi made it finally to Alexandria.

The town has a lot of great charming Georgian architecture which they have done a good job of keeping in-tact.

Ok I said enough history, but it is hard to avoid sometimes.  After all, I feel I should mention former parishioners of Christ Church include George Washington and Robert E. Lee.

I walked around for a while, and then headed back to my hotel—which turned out to be a major adventure.  Following the hour-long Metro ride, I quickly pillaged some food from the club lounge.  From there I headed to the Ronald Reagan building-next to the Old Post Office Pavilion where I started out the day, and watched the Capitol Steps.

The Capitol Steps are a political satire group started by senate staffers, and well worth the price of admission in my opinion.  Whether you are a Republican or Democrat you can expect to laugh, as they manage to poke fun of both parties.

Overall the day was a little slow at times, but it ended with a bang!

If you liked this post, why don’t you sign-up to receive free blog posts via email (only 1 email per day!) …because then you’ll never miss another post or trip report!