Following check-out from the Ritz-Carlton, Pentagon City I took the metro the airport.  While checking in at the counter nearest to the Metro entrance, (perhaps my problem not to use the First Class check-in) the ticket agent informed me that my bag was over 50 pounds.  I informed him that as I would be flying in First Class the weight limit would be 70 pounds, and he responded “Oh, I see you know your rights!”

I proceeded through security and almost made a royal mistake.  I headed over to the gate for my flight, and noticed that the flight had been delayed.   So I waited around for a little bit and noticed that yes, I was looking at a departure to Atlanta, but it was for a later flight!  Fortunately, I realized before my actual flight finished boarding that the flight numbers did not at all match up and found my way to the other gate.

Those of you who have been to Reagan National, at least in the Delta terminal, know how easy this is to do.  In a small area you have 5-10 different gates at the end of the terminal, so it is easy to confuse them.

I boarded the plane, then was offered a pre-departure beverage.  Boarding on the MD-90 didn’t take too terribly long, then we were down the runway and up into the air. 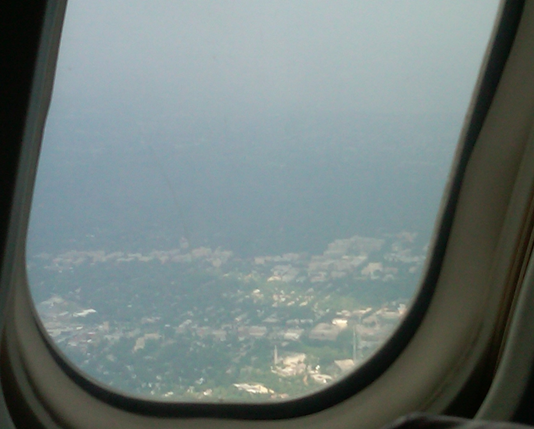 We were only up in the air for around 30 or 35 minutes, before descending into the Atlanta area.

Most people absolutely dread flying through Atlanta, but I love it to death.  Perhaps part of that is I grew up in Tennessee so hearing those charming southern accents reminds me of home.  Also, it was a place I found myself traveling through a fair amount when I was younger, usually on my way to visit relatives in Oklahoma, so it reminds me of the “good ol’ days!”  And finally, I love the great food.  Yes, I said the airport food, but there really are some great options at the Atlanta airport.

They happen to have one of my all time (cheap) favorites, Krystal.  I think what makes Krystal special for me is you cannot get their petite, square hamburgers outside of the southeast, and again it reminds me of my childhood.  So I headed over to the A concourse and grabbed a couple of the mini burgers, as an appetizer….

My Krystal served as a small appetizer for something else on the finer side of the gastronomic spectrum, a train ride away in the E terminal.

One Flew South is a highly-acclaimed, yet somehow serene gem of the Atlanta airport.  Like Granatos in the Salt Lake City, it was brought into the airport having been already made a local establishment.

Their theme is Japanese-Southern gourmet cuisine.  Aas odd as that may sound, their food is simply incredible.  Hands down it is the most delectable restaurant I have ever been to, and it delivers every time with exquisite delights and exceptional service. 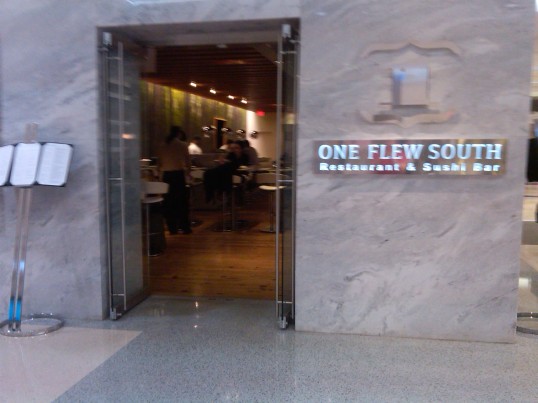 For my main course, I went with the Pan Roasted Ribeye, which consisted of “Grilled romaine, rutabaga, tomatoes, pearl onions, rye croutons, balsamic red wine sauce.”  And it was every bit as good as the picture makes it look: 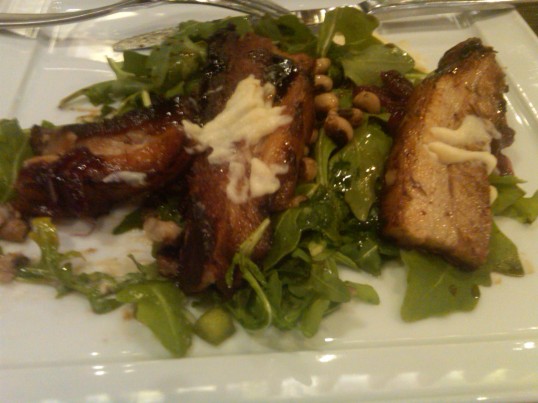 My waiter convinced me to try their Bread Pudding with Hazelnut Crunch, which was sensational:

My stomach full and wallet empty, I sauntered over to the gate for my flight to Minneapolis…