I arrived at the Pasco airport close to 5 PM, around an hour and a half ahead of our scheduled arrival time of 6:20 PM.  I headed straight to the Sky Priority lane, but unfortunately one or two passengers from the main line were helped before I was.  Finally the ticket agent inquired if I was a Medallion member before helping me.

Too long for my liking, but still a bit better than the regular line:

It was a good thing I checked, because I noticed I had Pasco to Salt Lake and LAX to Tampa tickets, but none for  the Salt Lake to Tampa segment.  It was probably from being wait-listed for the upgrade, but after some typing and muttering some  programming lingo (anyone know what system they use to validate fares?) the agent was able to issue my remaining ticket.

I headed through the x-ray security area, and got through without much trouble.  There was some announcement for a passenger on the telecom, but since my flight was still an hour away from departure, I tuned them out.  The TSA officer checking my ticket asked if that was me, and I said I hadn’t been paying attention.  She told me I would perfect for working TSA!  Lovely knowing that working for the TSA means you don’t notice anything… 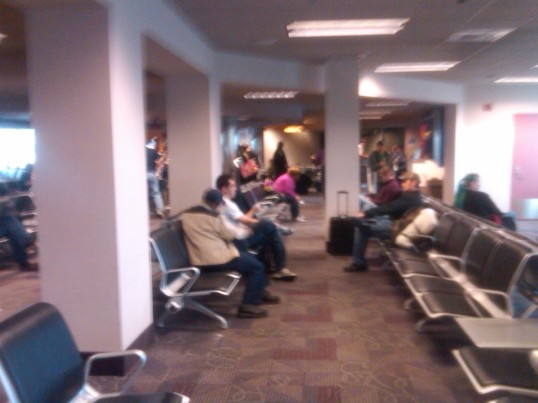 While the Pasco airport is fairly small and may suffer from a lack of venders, a big plus for it is that it features FREE Wi-Fi internet access, unlike most other airports.  After sitting for a little bit, they announced that they would need a volunteer (I’ll be a “Tennessee” Volunteer!) to take a later flight.  Unfortunately, by the time I stashed away my computer and ran to the desk, they had their supposed volunteer.  Drat.  I don’t think it would have really mattered in the end, because the passenger that I thought received it, boarded anyway.

In retrospect, even if it was possible, it’s probably better that I didn’t get it.  I would have missed out on BOTH an upgrade and another bump later in the evening.  But I am jumping a little bit ahead of myself.

Soon boarding got underway, and I was able to board in zone “Sky Priority,” the new number 1.

Upon boarding I noted that the overhead bins really didn’t seem all that big, (something about INCREASED overhead bin space?) but I managed to fit my backpack in since I was sitting in the bulkhead of this one-cabin aircraft.

The flight really wasn’t all that interesting, as it was a fairly short with barely enough time for much of a snack and drink service.

And aside from a very erm.. unique  seat mate, the only other thing to note was my flight attendant, who looked likely to win a John Locke look-alike contest, in a very freaky way:

By the way, I asked him if he ever got comments about looking like John Locke of the TV show Lost, and though he had never seen it, he did mention that he had been told that plenty of times.

We landed right on time, which was good because I only had about 30 minutes to make my connection.