Sunday I had a conference call in the mid-afternoon, so despite a late start, I figured I still had time for visiting the Tampa Electric Manatee Viewing Center, as reader Jason suggested.

It was a little bit of a quiet and enjoyable drive–approximately 45 minutes south, and close to Apollo Beach)  When I finally arrived, I was a bit shocked, as the scenery was NOT what I would expect to find at a wildlife observatory: 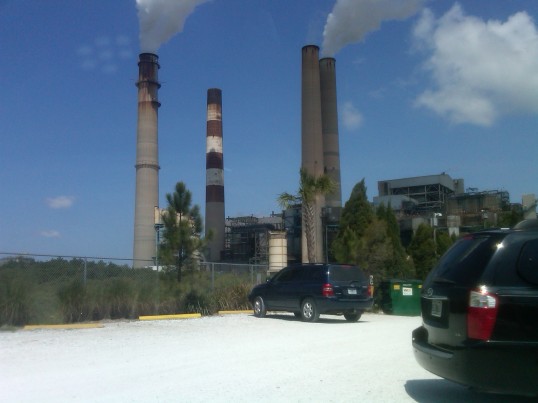 I mean, perhaps it is just me, but an industrial plant with emissions spewing out doesn’t scream “wildlife sanctuary” to me.

Evidently though the power station adheres to strict environmental emissions standards, and the entire facility prides itself on being very green: 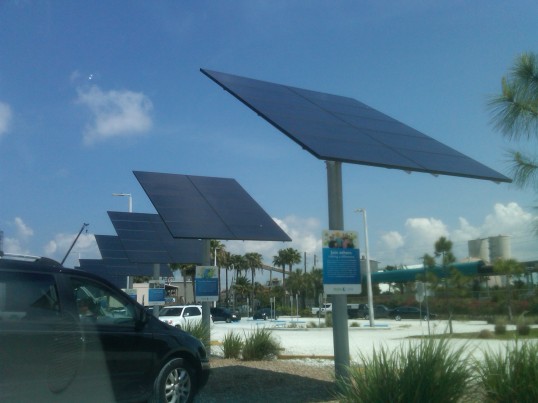 Solar Panels in the Parking Lot

In addition, the warm water discharged from the plant make it a prime spot for manatees to congregate during winter months.

After roaming around in the interpretive center and watching a video on manatees, I went over to the observation deck, looking out toward Tampa Bay.

I searched the waters, and even used the “Pay-per-use” binoculars, but could not clearly make out any manatees in the water.  Bummer.  Maybe the fact that it was 85 degrees out had something to do with that.

At the other end of the viewing center, is a mangrove sanctuary.  The walkway extends out into the heart of the mangrove, making it a neat place to enjoy the
tropical vegetation.

Later in the day, I drove around to a place where “The Bucs stop here:”

And then circled around to George Steinbrenner Field, home of the Yankees during spring training.  The joke is that the yankees come to watch the Yankees play.

I decided to finally visit Ybor City, which can be best described as Tampa’s version of Bourbon street.  The Cuban cigar businesses in Ybor are what originally put Tampa on the map, and what makes for a colorful neighborhood today.  I had heard good things about King Corona Cigars and Cafe, so I decided to give it a try.

Unfortunately after walking a handful of blocks from where I parked my car, realized I had forgotten my digital camera phone.  The good news is you can see all the juicy information on there website, which I have linked to here.

I had a traditional Cuban sandwich which included roasted pork, ham, salami and swiss cheese, garnished with lettuce, tomato, a pickle, mustard, and mayo on a hot pressed role.

When in Rome, do as they Romans they say, and so when in Ybor, I decided to have a Cuban.  Laugh at me, but I decided to start off my cigar experience with a cappuccino-flavored one, which was alright and a little tasty.  Fortunately for the sake of my oral health, I ended up with a slight headache, so doubt I will continue the cigar use on a regular basis.

Exploring Tampa was fun, and like any trip I wish I had time to see more, but thankful for the experience I had!