I checked in at the SkyClub, and it wasn’t crowded wall-to-wall like it was the first time I had visited, and I snagged a desk to catch up on some emails.

The cool thing is that they had the IPads on display, which impressed me.  Then again, it doesn’t take much.

IPad in the SkyClub

Unfortunately there are very few windows in that particular SkyClub, and I didn’t feel like transferring terminals to go to a different lounge that did.  After about 2-2 and a half hours, I headed out to the gate for my next flight.  I noticed that the gate area had some signage for Delta’s upcoming upgrade of LaGuardia: 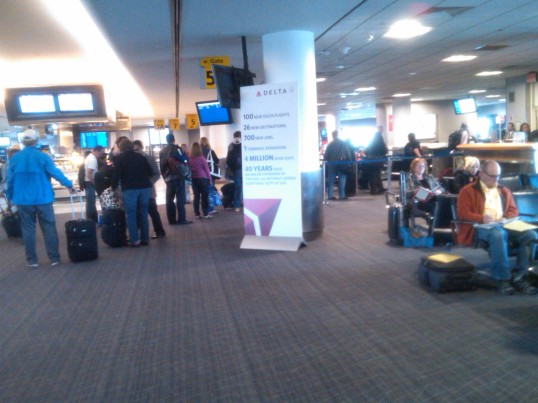 Anyway, boarding was just about to get under way.  Unlike my outbound journey, I would have no luck getting a “bump” today.

Unlike my previous flight, I did not end up getting upgraded and the service was well… serviceable, but not out of this world.

We managed to take off on time, and I managed to snap a pretty good photo of the New York area as we were departing:

Taking Off from New York

After we hit our cruising altitude, a drink and snack selection was offered as usual.

Again, not too much was interesting about this flight–or my next flight for that matter, save an entire group of high school students on a field trip just behind me.  They actually were fairly well, behaved for high schoolers, then again they came from Montana, so maybe not all THAT interesting.

Once we landed in Minneapolis I headed over to Axel’s Bonfire Grill since I wanted some more substantive fare than just a SkyClub could offer.  I ended up having a MEGA  burrito which left me utterly and helplessly stuffed.  I am not a huge fun of the Minneapolis dining options, but Axel’s is a pretty good place to grab some food.

I walked off my gluttony, then hung out in the SkyClub for a little bit.  For some reason, I did not think of taking any pictures, sorry.

I headed out after about an hour for my final flight of the night.  In fact, I was approaching the gate and about to take a picture of it when I was suddenly bull-rushed by a friend headed to Pasco on the same flight.

It was fine and I enjoyed catching up with him.  But things got a little awkward for me when he asked where I was sitting.  I had been upgraded about 2 days out, but didn’t want to look like a First Class snob, so I just said “3A.”  He immediately responded “Oh, you’re in First Class.”  Crap.

You see, maybe it is just me, but in these situations, I am afraid someone will either think A) I’m an elitist (no pun intended) and that I think I’m better than them, B) I am unwise with my money and actually pay for First Class, or C) Both.  So I always get hesitant when I see someone I know and I have been upgraded.

Anyway, I boarded and I was able to people watch as they came on.  At first I thought it was cliche, but the more I sit at the front of aircraft and watch people board, the more I believe their demeanor says a lot about them.

Anyway, my friend boarded and as he passed by I handed him the (unopened) bottle of water that had been placed in my seat.  Hopefully he appreciated this gesture, but perhaps I should have done more and offered to switch seats.

I texted him after he sat down, and asked if he would like any “free libations” or wanted to trade seats, and he simply responded “not at this point.”   I felt bad when he said “at this point,” like I had failed him.  I don’t try to be a jerk, sometimes things just don’t even cross my mind.

Anyway, I was blessed with a lead flight from Mississippi–accent and all, who promised that there “would be no movie, but it would be the most entertaining flight I had been on.”  She was a character for sure, and received a few chuckles.

After about 15 minutes or so, the door was closed, and take-off commenced.

Delta Flights longer than 2 hours usually include a meal service, but since this one left after 9 PM, it only included a “snack” service.  All it really is a choice of chips, candy bars, peanuts, and pretzels, so I wish they would have some more appetizing options available.

I don’t know if it’s me, but the flights where I have been upgraded seem to pass by faster than the ones where I am sitting in coach.  It’s a shame really.

Once we landed and I was getting off the plane, I thanked Ms. Mississippi, and informed her of the following:

“Of all the flights I have ever been on, this by far….
Was the most recent.”

Really, she did pretty good, I just couldn’t resist.