Georgia on My Mind: Ritz-Carlton, Atlanta

As I said before, I had a surprise awaiting me in Atlanta, and one that that didn’t have me to thrilled initially.

Shortly after booking my first 2 nights at the Ritz-Carlton, Atlanta (call me spoiled, but it only cost me $133/night since it was midweek) I had booked a car service to pick me up from the airport, through the hotel’s website.

And this is where it gets hairy.  For starters, no price is directly quoted on their website, despite the fee of $75 or so.  I know maybe I should expect some cost from a service, but it if there is absolutely NONE quoted, it is reasonable I think to expect the service to be free.  Especially when there are hotels out that that provide such.

What I think made things worse was their utter lack of communication.  OK, not all requests can be granted – fine I thought I would just take MARTA to the hotel.    But the key issue is the misleading verbage providing after making the request:  “Please note, that these requests should not be considered confirmed reservations until you receive confirmation from The Ritz-Carlton.”

So  despite the nice and comfy ride I was about to have, I was a little miffed when I landed, after taking a later flight, to turn on my phone and discover someone was waiting to pick me up.  Contrary to their own notification system.

I suppose I could have just forgotten the deal, and left on my own but I didn’t want to leave someone their waiting for me.  I didn’t want to be rude, so went along and kinda felt sorry for him.  Until he had the audacity to say I would be charged an extra hour.

Right, I have no clue that you are picking me up, and you are going to charge me double because I wasn’t psychic enough to call and tell you–when I also don’t know your number, that I am going to be late?

Anyway, the ride was fine and I am sure they usually do a top-notch job.  It’s just that the error was in the hotel NEVER informing I would be greeted indeed.

All of that anguish was soon washed away when I arrived at the Ritz-Carlton, and immediately greeted in the valet loop by a charming a bellman asking me how I was doing.  I was whisked into the lobby, where I proceeded to check in. 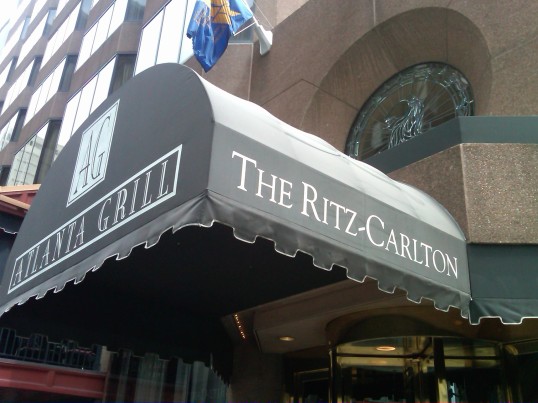 After checking in, I headed up to my standard King room on14th floor.  I hate to apologize, but WordPress has been AWFUL about uploading some of my photos, so for some of them you will just have to use your imagination.  🙂

While Marriott offers Gold and Platinum complimentary Club Lounge access, the fact that the Ritz-Carlton technically has its own rewards program, so they charge Marriott Rewards members for access.  In addition, I don’t blame the Ritz-Carltons for charging for the access, considering their lounges offer complimentary alcoholic beverages in their lounges.  Between this and the full gourmet spread that is available for breakfast, lunch, mid-day snack, supper and late night cordials, I though it was well worth the $100 I paid for access during my stay.

The Club Lounge on the 25th Floor is fairly wide, with the food at the left end as enter, and plenty of seating, divided up into a couple different sections.

The spread was extensive and included eggs, parfaits, sausage and great lightly cooked salmon for breakfast.  The lunch and dinner fair included finger sandwiches shrimp, and a variety of hors d’oeuvres. 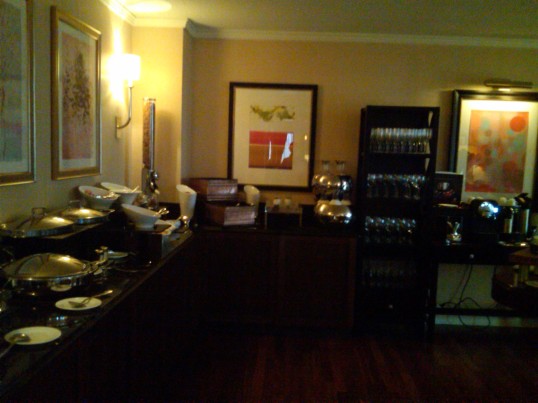 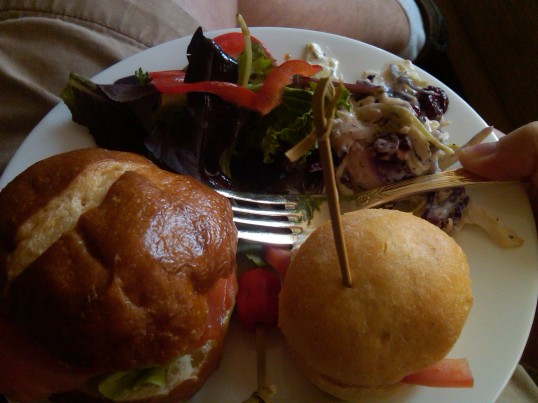 I have to say that the lead concierge, Paula did a fantastic job serving guests, and made probably the best Bloody Mary I’ve ever had.

Overall, I think the hotel did a decent job of living up to the the Ritz-Carlton standard for service and luxury, and I would be willing to return again (sans car service) if I were in the Atlanta area again.

7 thoughts on “Georgia on My Mind: Ritz-Carlton, Atlanta”