I Got Kicked Out of First Class!!

I traveled down to Oklahoma over Thanksgiving—using an optimal routing of course and something wonderful happened.  For the first time on a trip for me, my elite upgrade percentage was 100%.

I flew from Memphis to Minneapolis (on a CRJ-900) and the service in First Class was wonderful.  Furthermore, the main flight attending working my cabin did a splendid job of keeping me topped off on beverages during the flight.

I arrive in Minneapolis, and consume a few more libations courtesy of the SkyClub, and some practically free Kung Pao Chicken and Sushi at Wok & Roll, courtesy of Small Business Saturday.

After a little while, I hop onto another CR9 flight in First Class, with another good crew.  In fact, this flight is on pace to be just as good as the one before it.  While most flights where I have been upgraded this year seem too short—and often are, my three hour flight to my home airport of Pasco takes even longer (about 40 minutes) than usual due to 110 knot headwinds.  Or mile, I couldn’t recall which.

Things are going blissfully for me, although whether due to too much food to eat, too much drinking, or simply jet lag, I am a little weary and kick back as best I can to rest a little a bit.  After a couple of drinks—and these flight attendants are keeping my glass full as well, I feel my stomach getting full, and I feel satisfied in just asking for ice water.

About 20 minutes later I awake, realizing I am about to hurl.  I run to the front of the cabin where the First Class lavatory and am told that I have to wait.  Someone is in there and the pilot is about to step out to use the restroom.  I am in no place for negotiations so I exclaim that I am about to throw up and need to use it right away.  I am told to wait right by the door, and given a barf bag.

But I can’t do it.  I suddenly feel awfully dizzy, and I go back to my seat.  Leaning into the aisle, I feel the liquids exploding out of my stomach in a disgusting mix, and I feebly attempt to puke into the bag.  Unfortunately for me, only about 20% makes the bag, and I am left with vomit all over the aisle, my seat, and even some of my pants and shirt.  JUST GREAT!

In case they somehow missed my nightmarish episode, I make sure to hit the flight attendant call button, and they soon spring into action with gloves and bags.  They did a marvelous job sopping my vomit up, as the lavatory opens up as I run for it as soon as it opens.

I survey the damage, and then try to control it by wiping down my pants and shirt with soap, water, and paper towels.  Fortunately, I was able to remove my shirt, as I had an undershirt beneath it.  By the time I head back toward my seat, the seat cushion has been removed and wrapped in plastic bag, and I am redirected to a new seat in 5A—the first row of coach. 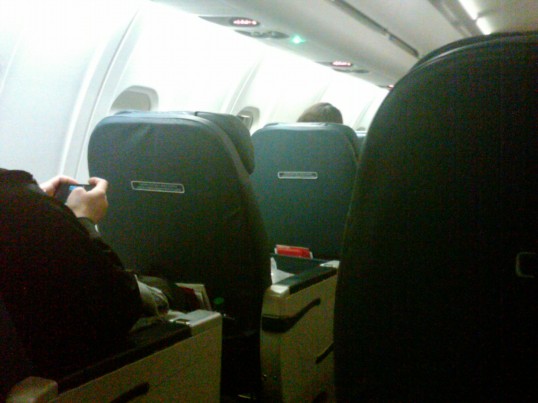 While I was slightly unhappy to be kicked out of First Class, I was grateful not to have to sit in my own vomit, that this particular seat by whatever means had opened up for me, and that we were finally beginning landing.

A number of people told me they hoped I’d feel better, which kind of offended me since I actually felt just fine, if not better than before I threw up.  Initially I thought it may have been bad sushi, but later realized that all of the items in my stomach did not mix well (thus feeling very, very full) which eventually caused me to throw up.

So I suppose the lesson learned is don’t drink ample amounts of several different beverages (Beer, Water, Whisky, Coke, Gin, Coffee) in one evening.  Otherwise you may find yourself like me:  kicked out of first class, on what had been such a good flight!

One thought on “I Got Kicked Out of First Class!!”